Ed McGee remembers roaming his Livermore neighborhood with his sister, pulling a wagon full of zucchini, looking for takers of the squash that his mother had grown in their backyard.

“Maybe my love of gardening comes from that,” said Magee, who works in the Engineering Directorate. “In our first garden, my mom planted seven zucchini plants (zucchinis are prolific producers). I remember loading the wagon full of the zucchini and meeting all the neighbors,” he said, laughing as he looked back. “After two or three weeks, no one was opening their doors.”

As chair of LLESA’s Organic Gardening Networking Group, Magee knows a thing or
two about gardening. He says his avocation is agriculture, but his vocation is a
mechanical technician at the Lab.

“Ever since I was in high school, I’ve had a desire to grow things that people can eat. There’s something special about putting a seed in the ground, growing it, raising it to harvest and then sharing the food and that experience with others,” Magee said

Magee is a year-round gardener at home and at the Lab. Before he joined the gardening club, he was already a commercial grower, with a 40-acre peach orchard. But not all members have the area to grow as much produce as they would like.

“A lot of our members who come out to garden at the Lab live in small apartments or have small yards and just don’t have the land,” he said. “The networking group, in addition to providing plots of land, water and tools, gives members an opportunity to walk around and talk to one another, meet new people and share their experiences. Both with gardening and work.”

The LLESA Organic Gardening Networking Group grows fruits and vegetables without using commercial pesticides or fertilizers; only organic products and natural methods are used to control insects and fertilize plants. There are 88 20-by-20-foot plots in the garden, located on the north  side of the Lab just west of the Center for Accelerator Mass Spectrometry.

The club draws from diverse backgrounds and skill sets from across the Laboratory, but all have a passion for growing their own food.

For Cary Gellner and Candice Bila, gardening is a family affair. The mother and daughter duo began gardening with the club close to three years ago.

“I found out about it from my coworker who was gardening there and would bring food in,” Gellner said. “We would go walking through the garden all the time and admire everyone’s stuff.”

That planted the seed. Gellner and Gila decided to have their own plot along with McKim so they could grow their own food and  roses — Gellner’s favorite flower.

“For me it’s therapeutic if I just go out in the garden,” Gellner said.

Bila said she didn’t really know about the club until she talked to her mom. “It’s a nice break from all of the thinking we do during the workday,” she said. “It settles my mind and makes me appreciate the farmers and fresh food that we generally take for granted. It’s a labor of love. I appreciate the food more when I know we put our heart and soul into it.”

Have it when you want it

Computation programmer Jim Leek might just be the longest member of the garden club. As a 16-year Lab veteran, he joined the club more than 13 years ago.

Though he gardened a bit with his mother while he was growing up, Leek admits that he’s self-taught by reading up in gardening books and websites. As a kid, he grew Indian corn and sunflowers and sold them in farmers markets.

These days, Leek gardens year-round at home and at the Lab. His crops include winter vegetables like lettuce, turnips, beets and cabbage, as well as summer vegetables including tomatoes, peppers and squash.

Leek’s purpose is practical: He wants to feed his family. “I like good produce and I like to have it when I need it,” he said. “I’ve got a big family and I want us to eat good things. It’s really nice to go in your backyard and eat what you grow. Unlike most Americans, we eat a lot of produce. When I grow it, I feel duty bound to eat it.”

And then there was the chicken 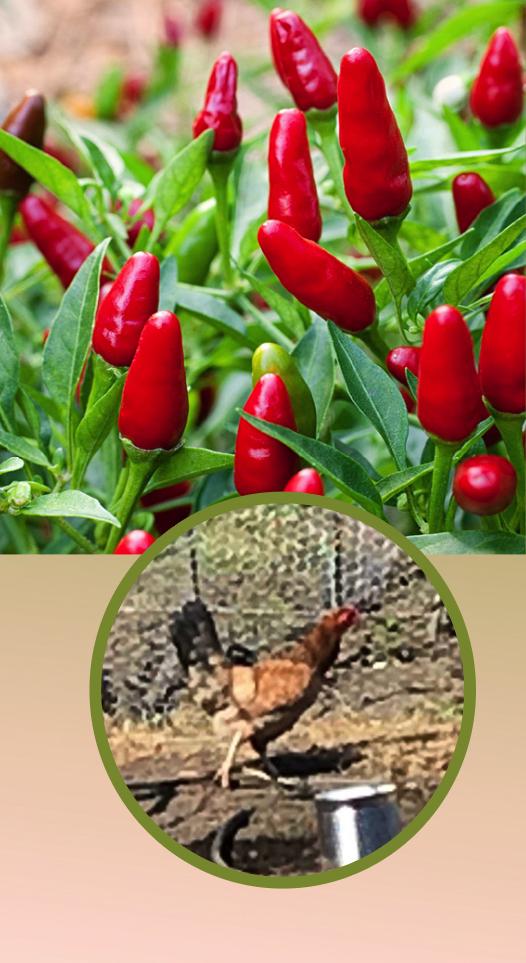 Ines Heinz, an infrastructure data analyst in the Weapons and Complex Integration Directorate, joined the club about four years ago. She didn’t necessarily enjoy gardening at home by herself. “I’m very social so I suckered in my friend and said, ‘Let’s do our own garden,’” she said. “It’s four of us now, so it’s a way of taking time off — a way of decompressing with co-workers, and that’s very important.”

Heinz’s specialty is peppers — any kind you can imagine: Thai, jalapeno, habanero, red beauty, serrano and poblano. She grew so many, in fact, that she couldn’t give enough of them away. So, she made roasted peppers, hot sauce and chile pepper paste.

But gardening isn’t the only thing that went on in the garden last year. “One day I was out there and there was a chicken in the garden,” Heinz said. “It had flown in under the cover of darkness and stayed in our garden for more than a month and then disappeared.”

“There were ideas to rehome the chicken. Ten people tried to catch the chicken,” Heinz said. “And then one day, he just disappeared.” Club members hoped he moved on to greener pastures.